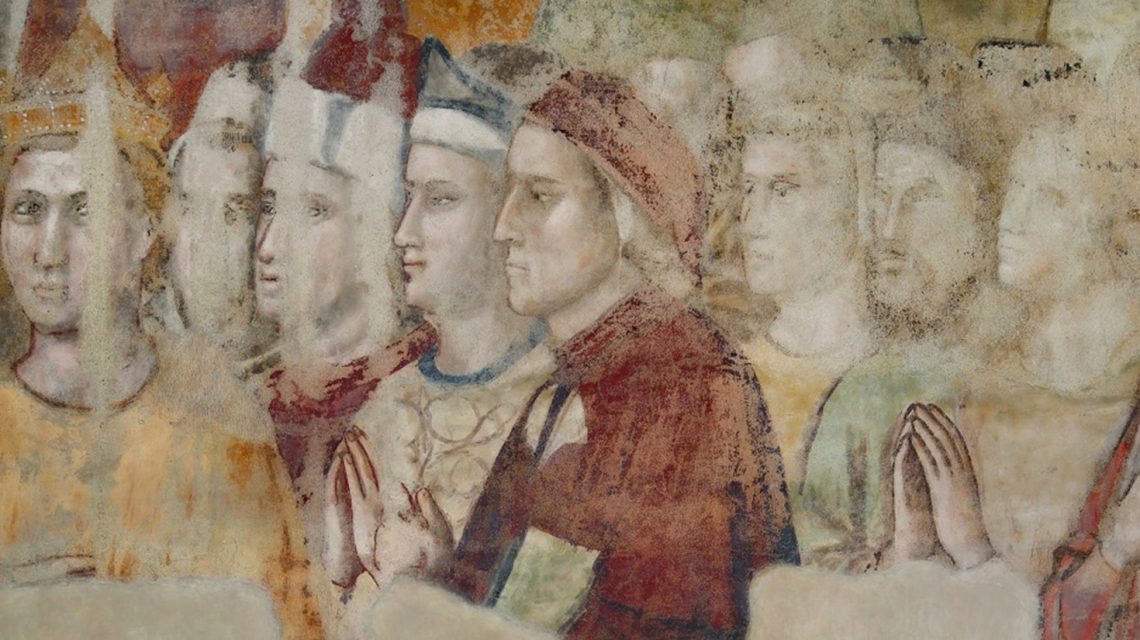 Dante, the visionary and the myth

In the meantime a voice was heard by me:
All honour be to the pre¬-eminent Poet;
His shade returns again, that was departed.
(Inferno, IV, vv.79-81)

This is the writing that stands out on the white marble of Dante’s sepulcher in the church of Santa Croce in Florence. Portrayed with a disdainful look, he is not inside. The mortal remains are in Ravenna, in the neoclassical temple built in 1780 by the Ravenna sculptor Camillo Morigia (1743-1795) next to the church of San Francesco in the portico where he was buried as soon as he died.
Over the course of seven centuries, the Supreme Poet has been admired, quoted, imitated as the encyclopedic, political, mystical, but also heretical and esoteric summit of the poetry of all time.
The protagonist of a poem that is individual and at the same time of all men, creator of a remarkable language and of immense visions, Dante appears as a personality of a gigantic stature in describing extraordinary figures, especially in the Commedia, who go beyond the symbol and become full of life.
Yet the character is a complex figure, difficult to interpret and continually in need of ever new investigations. The real face of this poet is to be rediscovered. He was a man deeply immersed in the events of the communal age, projected towards universal values of justice, illuminated and guided by a demanding and ardent Christian faith.
The honour of having given way to the cult of Alighieri belongs to Giovanni Boccaccio (1313-1375) both with le Esposizioni sopra la Commedia di Dante that is , the commentaries on the Commedia held in 1313 in the church of Santo Stefano di Badia in Florence and with the hagiographic Trattarello in laude di Dante, a little treatise in praise of Dante of 1350, work in which he presents that physical and moral portrait of the Genius who will enter the collective imagination: aquiline nose, severe expression, and curved walk.

As mentioned, Dante’s iconography is based on the description of the writer from Certaldo. However, already in the fourteenth century, at least three portraits of Alighieri in Florence can be identified. The oldest known was made by Giotto who portrays the poet’s face including it among the ranks of the elect in Paradise inside the chapel of the Maddalena in the Bargello. This portrait was made around 1300 and it is considered the one probably closest to the real physiognomy of Dante as a young man.
The second portrait is by anonymous and is located in the large hall of the Palazzo dei Giudici dei Notai, the Palace of Judges and Notaries. It was made around 1300 and it depicts the poet in profile, with a brown, elongated face, a sharp but not aquiline nose.
Finally, we have the effigy of Nardo di Cione from around 1350 (the Strozzi chapel, Santa Maria Novella), with the poet aged and with a more marked profile.
Since 1300 the iconography has oscillated between the representation of a tense and severe Dante to that of a more serene and youthful man with a prevalence of the former in the collective imagination. Typically the poet is depicted shaved, with a hood on his head, a long red dress, and a book in his hand.
This is how it appears in the celebratory panel in the Florence Cathedral by Domenico di Michelino (1495) in the portrait of Sandro Botticelli (1495 Geneva, Private Collection), in that of Luca Signorelli in Orvieto (Duomo, San Brizio Chapel, 1499-1504) and in the fresco of Andrea del Castagno (around 1450) which depicts Dante within the Cycle of illustrious men and women in the cenacle of the former Benedectine convent of S. Apollonia in Florence. The detached fresco is now in the Uffizi and has recently been restored by the Opificio delle Pietre Dure (Hard Stone Factory).
Bronzino’s table is set in this direction (around 1541, Washington, National Gallery of Art) in allegorical style and that of Giorgio Vasari (Minneapolis, Insitute of Art, 1544), proof of a consolidated model that is still repeated today.
In the XIV and XV centuries, the miniatures accompany the texts, such as those of the Sienese Giovanni di Paolo (1438-1444) where Dante dresses in blue and is also mentioned in his table of the Last Judgment (1465, Siena, National Picture Gallery) or in Botticelli’s 94 etchings of spiritual elegance (around 1490) today preserved in Berlin and in the Vatican Library, a unique masterpiece.
The great century of Dante’s iconography, however, is the nineteenth century, when the artists focused on single episodes of the Commedia. Among these Eugène Delacroix, Henry Holiday, Alexander Cabanel, Gaetano Previati, Giovanni Mochi, Raffaello Sorbi.
Also, in the XIX century William Blake’s ‘metaphysical’ illustrations stand out (1824-1827); the famous and widespread romantic engravings by Gustave Doré (1861-1868); the gigantic unfinished bronze sculpture The Gate of Hell by Auguste Rodin (1880-1917).
In the twentieth century we consider significant the works of Salvador Dalì (1950-1959), Alberto Martini (1922-1944), Robert Rauschenberg (Inferno, 1958-1960), Renato Guttuso (1950-1970), Aligi Sassu (1986), Achille Incerti (1968), Agostino De Romanis (Dante and Beatrice, 1997) and the most recent illustrations by Gabriele dell’Otto (2019).

The exhibition Dante, the visionary and the myth

Seven hundred years have passed since Dante’s death and yet the traces of his work remain vivid in our collective imagination and in our language, the result of thinking that still continues to speak to us today.
Symbol of Italian culture in the world, father of the Italian language, as well as an inexhaustible source of inspiration up to the present day, the supreme poet is celebrated with numerous initiatives: conferences, concerts, performances, videos.
There are also many exhibitions that enhance the event, set up above all in the three Dante cities Florence, Verona, and Ravenna, but also in other cities like Forlì and Rome.
On the occasion of the VII centenary of Dante’s death, the “Giulio Carlo Argan” State Art School in Rome has planned the exhibition Dante, the Visionary and the Myth highly conscious of the profound link between the poet’s literary production and the school itself that in its didactic programs deepens the figure and the work in its spiritual, religious and artistic dimension.
Dante’s centenary thus becomes a new opportunity to deepen the path of knowledge and study of Alighieri which allows the start of an exhibition project. With the aid of artistic, pictorial, sculptural, graphic, architectural and design works made by the students, this project intends to further investigate experiences, aspirations, contradictions, the universality of the Florentine poet who in his life and in his production has tirelessly sought the truth by reflecting on the meaning of existence.
The collective exhibition conceived by the school principal Nicola Armignacca was inaugurated at the Pastificio Cerere Foundation in Rome on 10 January 2022, becoming part of the programming of Dante’s celebrations and establishing itself as the most meaningful event of the current school year.
The event investigates the myth and the fortune of the poet and of the Commedia with the purpose of focusing on two major issues. The first concerns the relationship with literature, the second, closely connected to the previous one, with art. The physiognomy of the Exhibition and the related catalogue, published by Timia Edizioni, are based on both themes.
The exhibition was designed to allow different levels of reading, addressing the general public and at the same time scholars; divided into two sections, it includes some literary contributions by illustrious Dante experts and the exhibition of over 40 works by the students. Probably for the first time, it reconstructs various dynamics in an original way and combines the skills of scholars from different disciplines. It is a unique event in the history of art and of Italian literature on which the ways in which Dante has come down to us depend.
The collaboration between the Argan High School and the Pastificio (pasta factory) Cerere Foundation was fundamental for the success of the exhibition and was also a training opportunity for various students involved in the project.
The exhibition Dante, the Visionary and the Myth re-proposes the figure of the Genius and the journey he made in his Commedia in the afterlife, giving life to a particular reinterpretation of Dante’s poetry but also of our time, making Alighieri “our contemporary”.
Many works have interpreted the poet: a man in exile who suffers, loves, prays, a Christian who attacks the power and even the pontiff. In particular, to strike the imagination of young artists was Beatrice Portinari and her premature death at the age of 24 that for days and nights will make Dante cry until he promises his friends: “I will write something great in her honour and all Florence will have to read it”.
There are many paintings that find a source of inspiration in the ancient portraits of Alighieri including the extraordinary ones by Andrea del Castagno and Sandro Botticelli that have influenced the visual culture of recent generations of artists.
The paintings do not lack the demons of Hell, the divine light of Heaven and not even the legendary characters of the Commedia: Farinata degli Uberti, Pia de’ Tolomei, Paolo and Francesca, Ugolino della Gherardesca, Uguccione, Pier delle Vigne.
All the young artists involved in the event found in Dante a sort of guide, he who had been guided by Beatrice and Virgilio, reaching with their works the empyrean of the blessed and the saints who recall the 33rd canto, the last of Paradise and of the whole Commedia. The experience they went through transmitted to them but also to us observers, the salvific evocation of the last verse of the Canticle:
… and therefore we went out to see the stars.