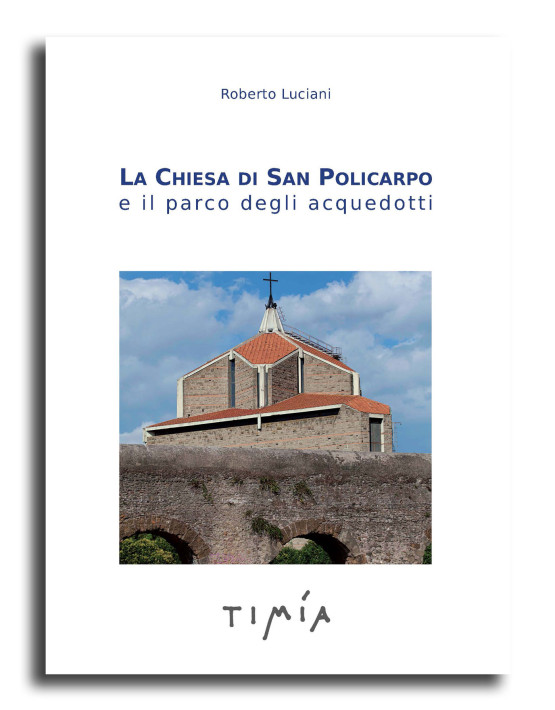 This book narrates the history of the church of San Policarpo, a large architectural structure located in the Tuscolano district of Rome, more specifically facing the Acqua Felice aqueduct.
The church of San Policarpo is symbolic of the architecture of the Appio Claudio quarter, and one of the most significant examples of sacred art built in Rome in the 1960s.
Designed by the renowned Roman engineer and architect Giuseppe Nicolosi (1901-1981), whose masterpiece this building is, the church is tall and imposing both inside and out; it is located on the outside edge of the quarter, but still inside the Parco degli Acquedotti, one of the most evocative and historical places in the Roman countryside. The church has a central layout steeped in symbolic, theological and liturgical meaning, expressed in two different structures: the outer perimeter of self-supporting masonry, the exterior of which is clad in square blocks of peperino stone alternating with courses of brickwork, and the interior structure in reinforced concrete, which supports the roof. Inside, six great pillars at the corners of a hexagon support the roof via six high beams arranged along the sides of two equilateral triangles mapped inside the hexagon; these intersect to form a six-pointed star. The second part of the book describes the Parco degli Acquedotti, an integral part of the Appia Antica Regional Park which is named for and characterised by the aqueducts that ensured Ancient Rome’s water supply. More specifically, the area is traversed by seven aqueducts, six from the Classical Period (Anio Vetus, Marcia, Tepula, Julia, Claudia, Anio Novus) which date between the 3rd century BC and the 1st century AD; and one dating from the Renaissance period (Felice), commissioned by Pope Sixtus V (Felice Peretti, 1585-1590).

Roberto Luciani is an architect, archaeologist, art critic and science journalist specialising in Monument Restoration at La Sapienza University of Rome and in Architectural Conservation at the International Centre for the Study of the Preservation and Restoration of Cultural Property (ICCROM). One of Italy’s leading art and architecture historians, he is the author of more than sixty books, released by major publishers and also translated and distributed abroad. These include Il Restauro, storia teoria tecniche protagonisti (Rome 1988), Il Colosseo (Novara 1993), San Giovanni in Laterano (Rome 2004), Santa Caterina dei Funari (Rome 2011), Agostino De Romanis, all’origine delle cose (Rome 2012), La fabbrica del San Michele (Rome 2014), Subconscio, conversando con Herman Normoid (Syracuse 2015). He is the executive editor of magazines and book series; his science articles have appeared in exhibition catalogues and specialist journals, book presentations and introductions and international conference notes. As Head Architect at the General Fine Arts and Landscape Department of the Ministry of Cultural Heritage and Activities and Tourism, Luciani has handled more than two hundred major restoration projects related to architecture, archaeology and art history. He was appointed in 1998 to the Roma Capitale e Grandi Eventi office established by the Prime Minister’s Office; appointed in 2010 as an expert in cultural heritage at the Italian Ministry of Foreign Affairs and Coordinator of the Farnesina Collection of contemporary art; acting for the latter he has curated major international exhibitions, including the Farnesina Palace and its Collections and Restoration, methods and instruments of Italian art. For many years he was a lecturer in Ecclesiastic Cultural Heritage at the University of Ravenna and the Pontifical Ecclesiastical Academy’s Religious Science Institute, where he was also leader of the Masters programme. In 1995 Roberto Luciani was awarded the title of Commendatore della Repubblica Italiana.